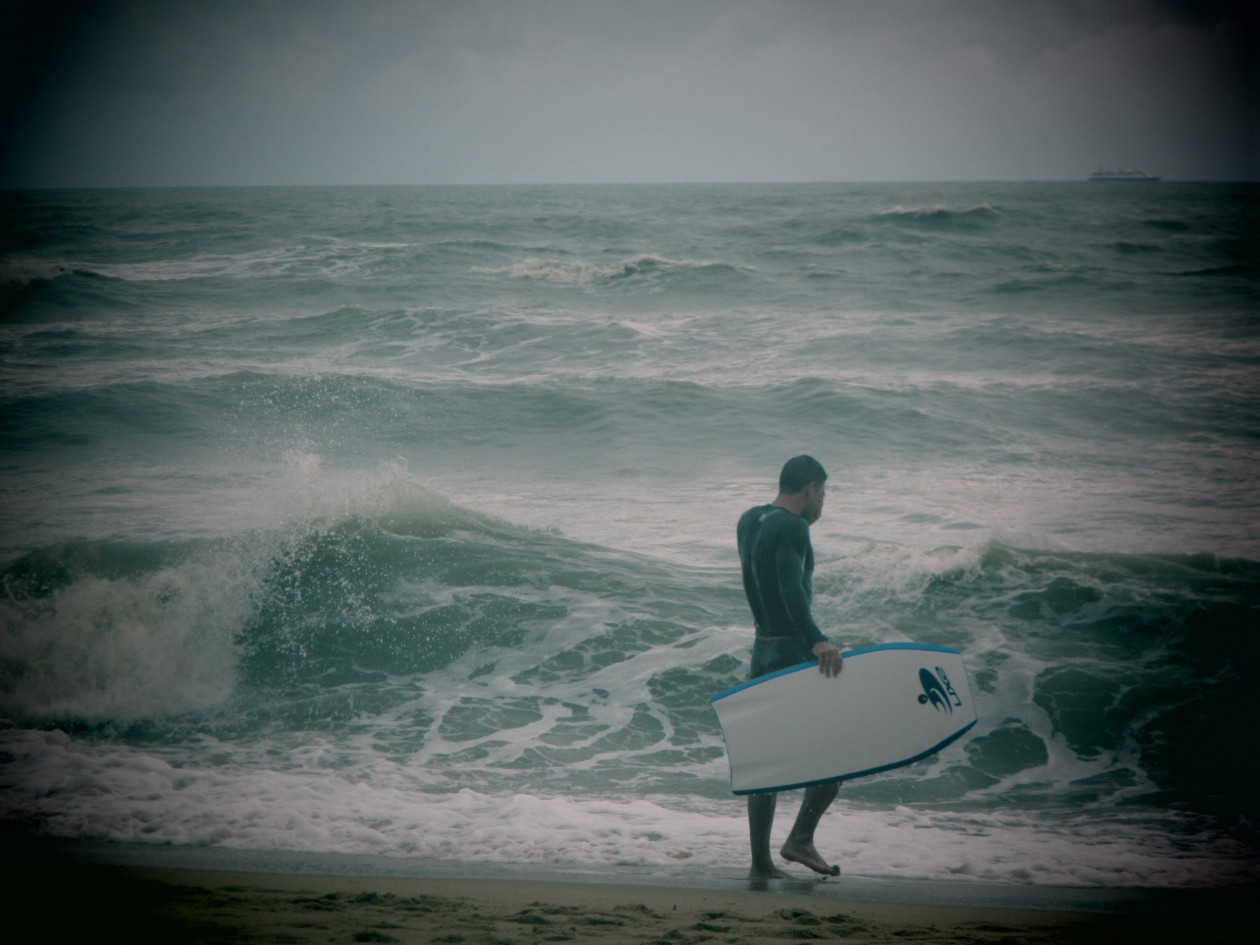 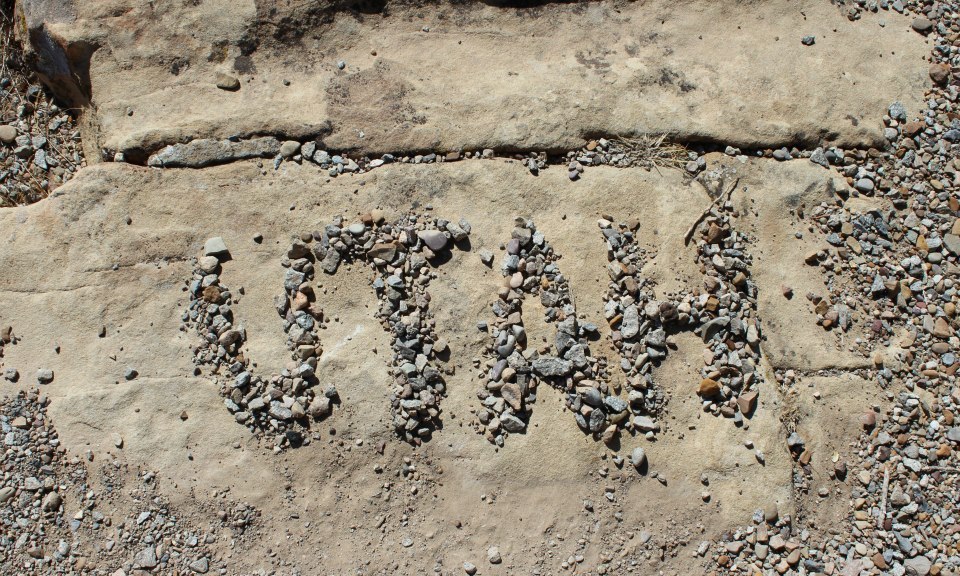 Whenever I tell someone about how much I love Utah I generally get the same reaction, a puzzled look followed by the question “Isn’t that where all the Mormons live?” Well, yes, there are a shit load of Mormons in Utah, but unless you’re going there for a Match.com event or have a crippling fear of short-sleeved button down shirts then that shouldn’t really bother you.

I first fell in love with Utah while on a road trip out west with my sister. Moab was the first stop on our 7 day adventure from Denver to LA and it pretty much ruined us for the rest of the trip. We were both shocked to discover how beautiful this state was, and baffled at the fact that no one ever talks about it! Sure, we always hear about the beauty of Colorado, Northern California, Hawaii, etc. but why is Utah so underrated?

We didn’t get to Moab until late in the afternoon because we had been driving all day from DEN.   By the time we checked into our hostel and grabbed something to eat it was only a couple of hours until sundown so we  decided to go straight to Arches to see as much as we could before sunset.  Driving into the park is a little daunting at first. The main entrance is a long windy road that goes up the side of the mountain to get to the top where all of the main attractions are.  The view going up is amazing, but at the time I had a pretty bad fear of heights and my body wasn’t yet acclimated to the altitude.  Once we got to the top though it was a different story, the world opened up to a field of shapes and colors and all of my anxiety melted away.

The sun was fading fast so we sped through the park and stopped at every turn out just long enough to hop out and snap some pictures. We knew that we had some great light with the sun so low in the sky and we wanted to take full advantage of every minute.  As we drove further into the park the sun got lower and the shadows from the rocks grew taller. “Look, there’s a penis, there’s another penis, and another!” we pointed to all of the different shapes and rock formations. The longer the shadows grew the deeper red the rocks became and by sunset we were almost speechless.  Only Dr. John  coming out of our stereo could begin to explain the energy at that moment. 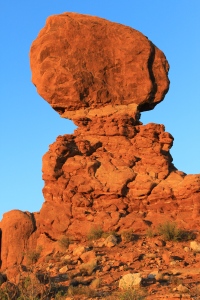 We drove about 3/4 of the way through the park and then we headed back toward the entrance to watch the sun go down from the Courthouse Towers Viewpoint.  There’s something bittersweet about those sunsets that drench the landscape in colors and light in a way that can never be captured on film, sad because it can never be recreated but special because it’s something in the universe that’s only for you.

Once the sun was gone we decided to call it a day and come back in the morning. It’s only a 10 minute drive from the park to the hostel but it made us both nervous driving down a winding road on the side of a cliff after dark.

Surprisingly (because of the number of beers we had before bed) we got up at sunrise as planned and headed back to the park to do the famous Delicate Arch hike. I can’t imagine doing the hike any later in the day because by the time we got there around 8 am the sun was already beating down. The trek took about an hour and a half, beautiful as expected and mostly uphill (a gradual incline but a bit strenuous because of the heat and the terrain).  The scenery was breathtaking and different at every turn, the rocks changing from smooth and calming to jagged and angry. The trail was pretty clear but if you were uncertain about were to go you could always follow the little rock piles (do NOT follow the chipmunks).  After about an hour and a half of climbing and sweating our asses off, we arrived at Delicate Arch.  Totally worth it.  Not only is it beautiful and 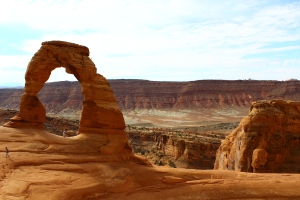 mysterious all on its own but it’s perched on a small slab of rock between a cliff and a giant hole that you have to maneuver if you want to get right up under the middle.  It’s as if it’s saying You’ve made it this far, now one last test to pass before you get your reward. 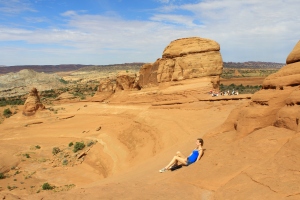 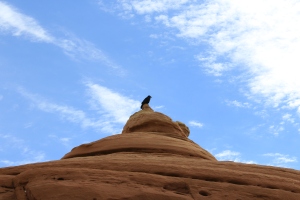 We played around at Arches for at least an hour and then headed back to check out the rest of the park before leaving for the second leg of our trip.  The hike back was much faster because it’s all downhill, or maybe it just felt that way because I was running (I had to pee something fierce).

We didn’t really know it at the time but we both agree that Moab was the most memorable part of our entire trip.  We’ve talked about how we wish that we had stayed there longer, but if we had, our experience would have been different, and who knows if we would remember it as fondly or if we would ever go back.  Maybe it’s for the best that Utah left us wanting more. 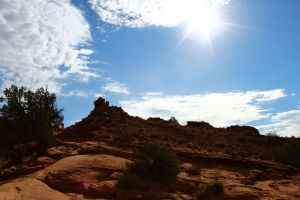 If you are ever in Moab I highly suggest staying at the Lazy Lizard Hostel.  My sister and I stayed here and it was our favorite accommodation of the entire trip, including the hotels.  I didn’t see the dorms or the private rooms but we stayed in one of the cabins and it was awesome.  The cabin is only $33 per night and has a large bunk bed with a full size bottom and a twin size top.  It’s really basic; just a bunk, a couple of tables, a lamp and a heater, but it’s super clean (we didn’t see one bug!) and the bathroom is only about 20-40 steps away.  The best part about the cabins is the front porch.  Every cabin has its own front porch with a little table and chairs that is perfect for beer drinking and star-gazing (hence the reason for us staying up way too late the first night).  I have been to quite a few hostels around the world and this one is still my favorite, hands down.

Another place that deserves honorable mention is The Eklecticafe. This quirky little restaurant has great food, great atmosphere and at least one really hot server…  those baby blue eyes peered straight into my soul…that pretty much sums it up.

Coincidentally (or not at all) I will be heading back to Utah this Saturday for a quick four-day trip.  My first stop will be Park City (I looooove Park City), and from there I’m just going to play it by ear.  I will be posting my shenanigans when and where I can.

Maybe it’s a blessing that no one ever really talks about Utah, maybe that’s part of the reason that it still seems so vast and unspoiled.  But, like any good secret,  I can’t help but want to share it with my friends.

This message is brought to  you by The Church of Jesus Christ of Latter-Day Saints. (Just kidding)