Earlier this year, while in Queensland, Australia, I was  lucky enough to come across one of the coolest creatures that I’ve ever seen first hand, the flying fox, aka fruit bat.  We were strolling down the main strip in Airlie Beach one evening at sunset, full from dinner and still foggy from the night before, when a large cat on a hang-glider flew right over our heads. “What the hell?!” we ducked and swatted at the air like we were being attacked by killer bees.  It didn’t take me long to realize that I was in bat country, fruit bat country.

I only saw one fruit bat while in Airlie Beach but the closer we got to Cairns the more we saw.  They would come in flocks at dusk and if you didn’t look closely enough you might just think that they were crows.  You could hear them crashing into the trees as they landed and sometimes falling from the top to the middle until they found a branch to cling to.

Where there was one, there were many.  You could hear them screeching and ticking, unclear whether they were having a conversation or warning each other to back up off my fruit yo. 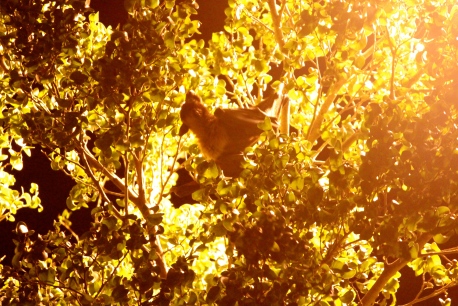 Sadly, I am not a photographer, and though I became slightly obsessed with trying to capture these guys on film, my efforts were futile.  The light (or lack thereof), and movement made it nearly impossible for a novice like me to get a shot.  So out of hundreds, I have only a few usable images, and even those are mediocre at best. Apologies for the lousy photos and HAPPY BAT WEEK!! 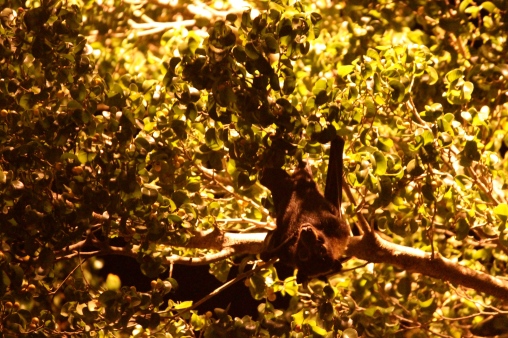 One thought on “No. We Can’t Stop Here, This is Bat Country.”